Corbin is a Preschooler!

Corbin had his first day on the Monday after Cambria started. He is still speech delayed, so he gets to ride the bus! I was a little nervous about how that would go considering when we walked around on the bus on his orientation day he wouldn't even step on it without clinging to me the whole time.

On his first day, Cambria rode the bus with him (because her bus stop is 4 houses down and they pick up at the same time and drop off in the same location). He walked on without a backward glance, and came home with a smile on his face!

The first week was a little rough, Corbin didn't engage much (I got a note from his teacher), but turned out that he gave himself a fever by Friday. I think he stressed himself out, to the point that he made himself sick. I haven't gotten another note from his teacher, so I'm hoping that means that he's starting to engage in class more. 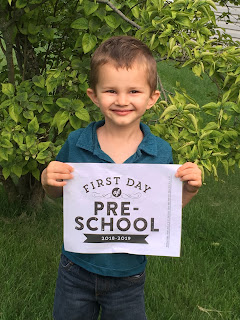 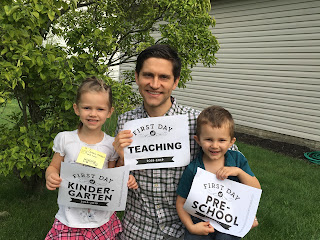 Turned out that Jonathan's first day of teaching as a tenure-track professor was Corbin's first day too! I had to take that photo opp.
Posted by Melissa Kershaw at 6:41 PM

Email ThisBlogThis!Share to TwitterShare to FacebookShare to Pinterest
Labels: Corbin