Christmas day was perfect! Cambria slept in until quarter to 8! It was awesome!

Here is a video of her waking up. I don't know if I mentioned that Cambria saw a little broom that I was wrapping, but that was the first thing she asked for (you can see it in the video).

We opened up our stockings and the kids were so excited about the snacks that Santa brought, that they didn't care about the mountain of gifts under the tree. 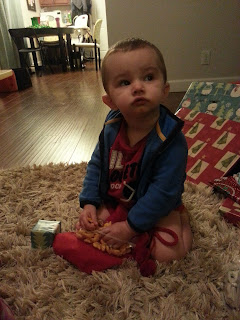 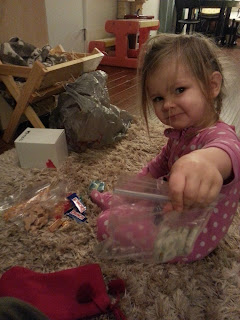 (I love the pic of Corbin... two hands in his fishy crackers!)

I felt a little bit like I was 10... I just wanted to start opening presents! Finally, I convinced Jonathan to open a gift. Then I did, and then the kids were interested in opening theirs.

We just took our time opening presents. They loved all of them! Even a temple plaque that I made them. I was worried that after all the toys, that Cambria would be a little underwhelmed, but she was just as excited about it as anything else. We finished opening all of our presents around 2:00. It was about 55 degrees, so we took a walk! It was so pleasant! 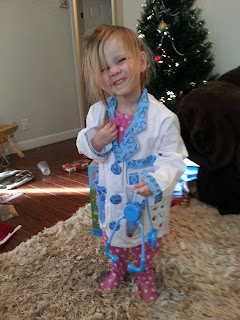 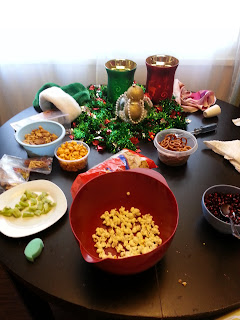 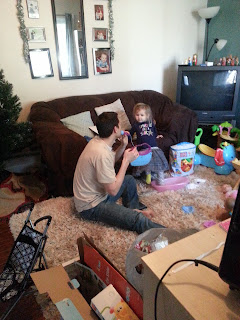 The rest of the day was full of snacking, playing and lots of "It's Christmas!" from dad, whenever Cambria asked for more candy or other things. We figured one day of absolutely no structure a year wouldn't kill them. It probably would do them some good :)

We talked to so many of our family members, I really love my family (both sides) and I was so glad to hear from a lot of them!

I have been surprised with how Cambria has taken to the cars and Corbin has taken to the music toys. Jonathan was right when he said "it doesn't matter what we get Corbin, Cambria will just take it and play with it", but I was pleasantly surprised that Corbin was excited about her gifts too.

Jonathan was super thoughtful and made me a gift that wasn't even close on my radar. He made me a height board. I told him ONCE that I thought it would be fun to have one. I think my exact words were "when we make one, I want one exactly like that" (when I saw the one that Sadie made). It's perfect, and very professional. I love it!
Posted by Melissa Kershaw at 5:01 PM